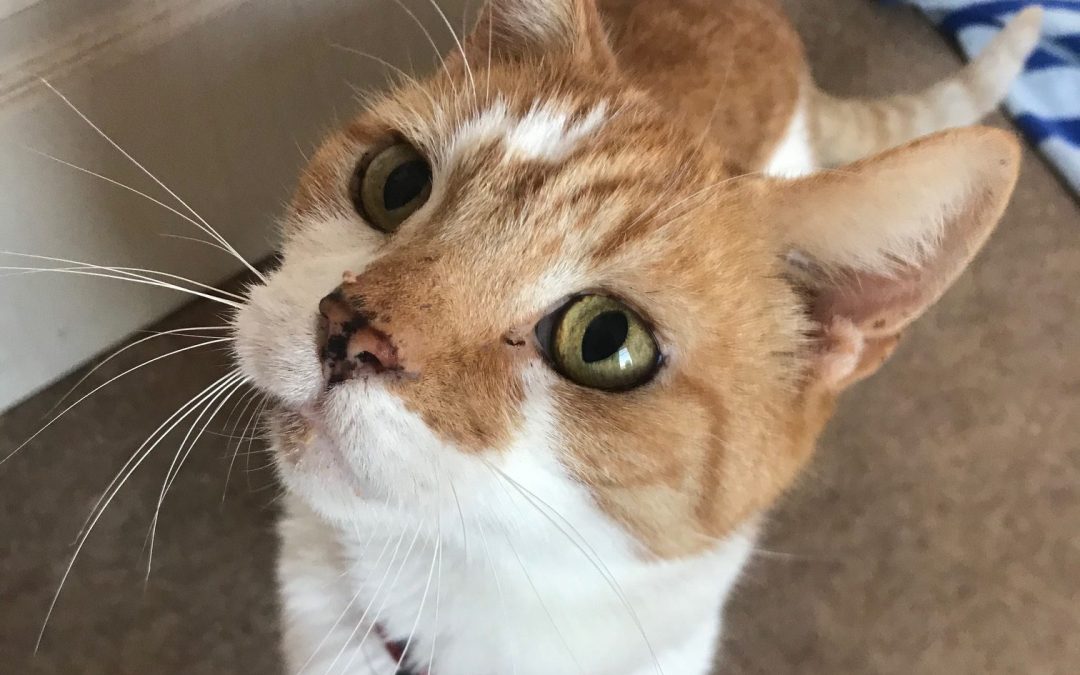 Summer had a rough time before his fosterer came along. Summer is ready to find a permanent home now, with someone rather special.

This is what our fosterer has to say about Summer….

“Summer is an older boy, roughly 10 years old, he is ginger and white with big eyes. He has had a rough journey and is in need for someone with plenty of time to give him some TLC. He is quite indecisive and confused, as he’s had such an uncertain, un-trusting lifestyle. However, in such a short period of time, with consistent and persistent care, Summer had already come out of his shell and had begun to trust, this is when his true colours showed and I saw he was such a lovely boy. He has spent many years outdoors and as a result, likes to be able to get out whenever he wants. This means he would need a cat flap at his new home otherwise he can become stressed when he doesn’t have the choice. Summer enjoys being outside, so if you spend a lot of time in your garden he may just be the perfect buddy for you as he will roll around next to you all day. He also loves to go on long and far journeys, then return home to curl up in bed. He has a wide variety of beds, but his favourite are hooded ones, so he can climb in and feel safe.

He likes his food, his favourite flavour is chicken, and his favourite treats are cat yogurts which he loves to lick straight from the tube. Summer is very confident and has no problem using his loudest meow to indicate when he wants food, to be let out, when he’s bored or when he just fancies a chat. He enjoys a good fuss around his head, just be careful around his ears, as these have been sore previously so are a sensitive area.

Summer is very territorial, he likes to make sure all other cats know which is his patch, and will protect it at all costs. He doesn’t like other cats so he will need to be the only cat of the house, and even better if there’s not many cats in your area. Summer is quite independent, wanting to do his own thing, but prefers someone in the house and will probably stay in the same room as you. Summer has not quite got the hang of playing yet, he has been surrounded by many different types of toys but shows next to no interest. He has so far taken to 2 toys, he very rarely plays with one furry toy, he will flop on his side and lick it for a few seconds before getting up and shaking it off. He also has a cat nip toy that he will roll around with until he gets tired and falls asleep. If you can give Summer the time, dedication, care and love he needs, he will open up to you, begin to trust you and be able to enjoy life much more with you.”

Summer has had all of his ailments treated, he had poorly ears (cysts that needed draining and ear mites) and he needed some dentistry also. Now these are all done and he is recovered, he is now ready to find his forever home.

If you feel you could give Summer a home, please complete our adoption application.

Any cookies that may not be particularly necessary for the website to function and is used specifically to collect user personal data via analytics, ads, other embedded contents are termed as non-necessary cookies. It is mandatory to procure user consent prior to running these cookies on your website.